In Search of Snow

The drive to Oregon gets really beautiful just after you are out of Redding, California. I always spend the night in Redding so I can truly enjoy the scenery after being rested and wide awake. It was especially beautiful since I was finally heading to where I want to call home.

The Mount Shasta area can be so breathtaking with trees climbing the ridges on both sides of interstate 5. I’ve done that trip so many times now; some by myself with my little dog looking out the window and enjoying the view. Twice with my daughter who did the driving for me and this last trip was with my son. He had always flown but this time he drove my car and the rented trailer back to Oregon. It was his first view of the spectacular scenery. This time I noticed something. Mount Shasta had almost no snow. It was all but bare. 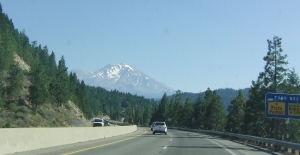 I love this view

I realize its summer but I’ve traveled this stretch in summer before and the snow on the peak was always breathtaking. The water levels have also been lower each time I’ve passed over the lakes of Shasta,. Lack of snow on Mount Shasta is the sign of even lower water levels for the region. Maybe this winter can turn things around for them. I certainly hope that is the case. Snow means water. 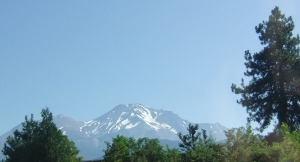 Another angle of Mount Shasta

I have to admit that I gave up on living in snow the year I came down with Bells Palsy. In the mountains of Arizona at 7200 ft., we would usually get around three feet of snow spread out through the winter season. The winter of 2010, we had six feet most of which was dumped on us in one night. I spent days shoveling after our canopy over the truck, jeep, tractors and miscellaneous tools collapsed on them. It took a bull dozer to dig us out. I didn’t care to ever see snow after that winter. 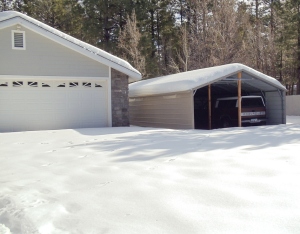 Multiply this snow by three and that’s what brought that canopy down the next winter.

Somehow, in all the moving, I’ve lost the photos of that epic snowstorm. Maybe they will still turn up.

We had an epidemic of shingles outbreak that winter which is the same dormant virus that causes Bells Palsy. Many alternative practitioners say the cold and wind have a lot to do with the dormant virus becoming active. Add the stress of an unusually hard winter or other stressors, and you have a breakdown of the immune system.

Oregon gets cold and wet; but there is no shoveling required. I prefer to leave that now to the younger generation. I like to visit the snow or pass by it from a good distance. It’s vital to our lives. I’m sad to see Mount Shasta so barren. Is there any hope of turning things like this around?

I think the environment should be put in the category of our national security. Defence of our resources is just as important as defence abroad. Otherwise what is there to defend? – Robert Redford

From my heart to yours,
Marlene

In Search of Identification

In Search of Kindness to Animals