In Search of a Break

It’s been hairy, hectic, and heavy. We’ve had a long week of shifting, shoving and shimmying stuff around.

The pods arrived and so did my former (ex) daughter-in-law. She worked like a trooper in helping my son and I build shelving in the storage unit. When he bought the shelves, I shook my head and shrugged, thinking this man is not playing with a full deck. No, I didn’t say it out loud. I just couldn’t see the picture he had in my own mind. 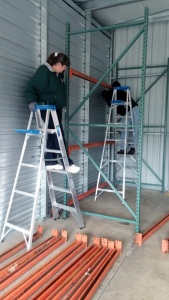 Once they were together, I had to admire his foresight. My stored stuff was placed on the first set of shelves moving from another location to this one closer to home. Then we had to make quick work to empty the first pod so they could deliver the second. The first one held all the heavy stuff like tools. The rest of the week was so exhausting that we all ate many of our meals out, showered and fell in our beds. Trying to squeeze five bedrooms, 3 baths, a 2 car garage and a shed’s worth of stuff into one bedroom and a 12 by 25 storage building along with my storage building worth of stuff was an exercise in mental hydraulics.

This is all my Christmas and crafts plus more sewing. If I ever get done moving it, I can use it.

When the last pod was emptied, we celebrated. My living, dining, sewing room, and kitchen are NOT celebrating. It looks like I just moved in all over again. Next week we will make it better.

One pod empty, one to go and there is still lots of room in here

Needing a break, the rest of the time my DIL was here, we wanted to show her some of Portland.

Where do we take visitors who come to our town? Well, my son had to take her to Multnomah Falls. He has photographed it every time he visited here.

One of my favorite of his photos of Multnomah Falls

Then of course there is the infamous “Powell’s City of Books”. They spent well over two hours there. I spent a great deal of it in the café watching Portland walk by, buying NO books this time. There is no time to read what I have so more will have to wait. Since they sell new and used, the kids came out with a few, mostly my son. The apple doesn’t fall far from the tree when it comes to collecting books. 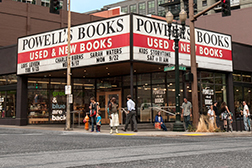 Don’t let the small appearance fool you. You need a map inside as it fills a whole city block

Then my sister met us for a tour of the Pittock Mansion grounds since the Mansion itself was closed for the winter. The view was breathtaking. I mostly enjoyed petting the dogs everyone brought. 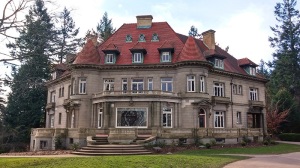 My son managed to capture the mansion with no one in front of it.

only part of the breath taking view.

One of the highlights of our town is that we live in close proximity to Bob’s Red Mill. They ship to stores all over the country and have started serving 3 meals a day. I love having breakfast there so we did. My son found the best ginger cookies I’ve ever eaten.

We timed it just right as they are always busy. They have outdoor seating for those that want to dine with their dogs. 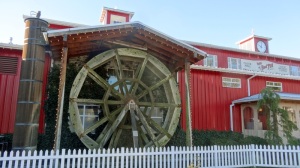 You can’t miss it driving by.

Row after row of organic everything. They will even teach you how to use it.

For me a town is a lot about the food and Portland does not disappoint. Since we were in such a jumble anyway, we tried several of the restaurants. The Ram makes the best French fries in the world. I should know, I’ve eaten them everywhere. We stopped by the German deli, Edelweiss, for stuff my DIL needed to bake the German cookies I gave her the recipe for. 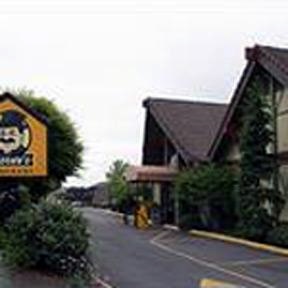 One of 4 Gustav’s/Rhrinlander’s in the Portland area, this one is very close to home

Then to cap off her visit, we had linner (combination lunch and dinner) at Gustav’s German restaurant. She tried the beer sampler with dinner and we all enjoyed the pretzel and cheese fondue. My son, I don’t know where he come from, had a hamburger, while my DIL and I enjoyed more traditional fare. It was LUSCIOUS! I took home a bowl of their lentil soup to see if I can figure out how they make it. Better than mine any day of the week. Of course, my son disagrees. The spaetzle was extra good with a Madeira sauce on them. Mom always used a meat gravy that we loved.

We had a cozier spot.

We arrived home to pick up the mail at the box up the street from the house. There were stacks of mail for my son and my sister. I had one piece. Just one, and it was happy mail! The Snail of Happiness, who was inspired to do so by The Contented Crafter, sent me snail mail. A happy package filled with her creativeness. We all admired her handiwork. How lucky am I!! Bloggers are wonderful people. 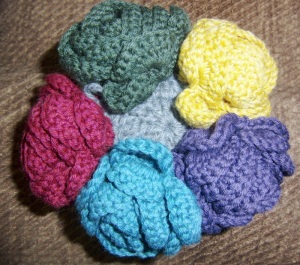 A bouquet of knit roses in wonderful colors 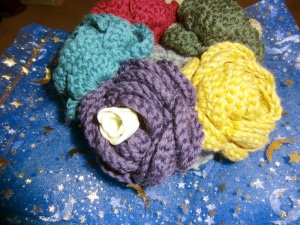 A tiny paper rose was hidden inside, all was placed in star studded organza bag

The vase of the roses in a perfect shade of blue.

Now I’m inspired to finish a few projects of my own…as soon as I unearth the sewing room, again.

That’s what I do when I need a break.

At what point do you need a break and how do you go about getting one?

In Search of Stability

In Search of a Way to Spread the Love