In Search of What’s up

Have you ever been so tired that even your fingernails hurt? That’s how I felt the last few nights after a long days of manual labor. Hard physical work is good for the body but my body keeps screaming, “You’re too old for this.”

For Alys. My fairy garden lives

Once cooler weather arrived, I was out the door trying to get the projects done that were on the list from the HOA. These are required to be done for this home that was not well cared for the past 10 years. I let a lot slip by when assessing this place for purchase. Now I really pay. In addition, I have a list of my own of things that I want done outside. My mind is totally occupied with these lists and the work being done.

Filling front porch with flowers out of the heat

Welcome to my home The porch needs to be resealed

I pressure washed the driveway side of the fence.  Tech Support did most of the rest of the fences. Now all four sides are done and ready to stain. I’m ready to do it too. I’m not sure if my body agrees. Hopefully the weather continues to cooperates and keeps the intense heat at bay.

Top of the terrace fence to stain 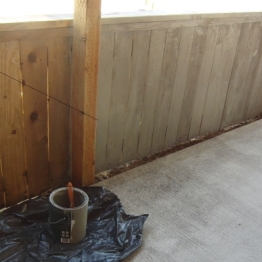 part of one side of driveway fence stained and sealed.

Each morning I have been planting flowers and ground cover called stepables. You can walk on them just like grass and don’t have to mow. I am tired of mowing weeds so they had to go. Ground cover went down a little at a time. I used a lot of cardboard then weed block cloth. We aren’t allowed to have weeds here. I think you can be evicted for them. They give you a warning first.

Some lavender, dahlia’s and ground cover plus some lantana for the butterflies 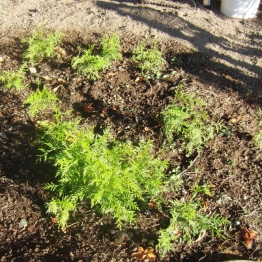 New batch of cedar that I’m hoping to keep going

only 3 of the varieties of stepables

I had 5 yards of bark dust delivered. I measured the yard and asked how much it would take to cover it. I really thought they were wrong and almost ordered 10 yards. Tech Support talked me out of it. Thank goodness!

The amount is hard to explain. It’s a LOT!

It took 3 hours of me working alone to shovel it out of the driveway into a 4 wheeled cart so it could go out back. Then Tech Support arrived home and worked with me another 2 and a half. As we were getting to the last of the pile, a neighbor boy showed up who had helped move my boulders when I moved in. He wanted to help. He was bored, like most teenagers when school is out. He has some developmental difficulties but is a good young man and a hard worker. I offered him $10 dollars and he had the rest shoveled and in the back yard in less than 30 minutes. Best $10 I ever spent.

From the driveway to the other side of the house

What’s left is spreading the bark mulch, placing landscape logs between it and the river rock that I placed around the perimeter of the house to keep mud off, staining the fences, painting the house, and pressure washing the front porch so it can be resealed. All before autumn rains.

Going this way too

In addition to all the planting on the terraces, I found a need to spray paint my plastic chairs that I keep up there to rest a minute. My next door neighbor on the porch side kept asking if I would give them back to her as she needed them now. She started asking other neighbors if they would get her chairs for her. Each time she asks, I explain they are mine and I brought them with me. That satisfies her for a few moments but with Alzheimer’s, it’s an endless loop. I spoke to her son and he had locked her chairs up because she kept bringing them into the house. I finally convinced him to put one on her porch for her. Making mine a different color was the easiest solution. Alzheimer’s is something I would not wish on anyone. 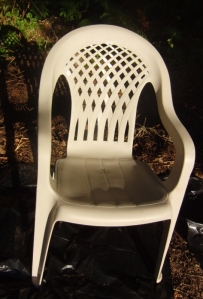 My chair on the hill 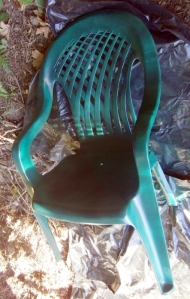 My Chair on the hill after

I love summer because we can be outside. I enjoy all the work and find much of it meditative. It just doesn’t leave much of me for anything else. I’ll pop back by when I can but you can bet I’m probably up to my elbows in stain, paint or dirt.  Maybe next summer will be a little less work and leave more time for the writing I haven’t been able to concentrate on.

I didn’t paint it but it’s too true.

In Search of Postal Love

In Search of Hot August Nights