In Search of the Results

I was waiting for the final verdict on many things last time I sat down to write. You know how things come in threes, well that doesn’t always work for me. This time it was in a group of four. In a two week period, the engine in my car decided that 84,000 miles was all it had in it. I think it got some junk in the engine and it wanted a cleaner diet. So Wednesday afternoon my car was ready… finally.  It hums along nicely and I have a new 7 year, or 70,000 mile warranty on it. Guess which it will be. Was it worth it? When you realize that a new car would have been the price of many engines and a used car will come with its own problems, I can say emphatically, yes!

It’s a working truck all the time.

I was also waiting for the eye appointment to figure out why my vision has blurred so much after the recent eye lid lift. The goal had been to get more vision, not less.  The ophthalmologist did such a thorough exam that I could see almost nothing when I left her office. There was nothing pathological going on with the vision.  No macular or retinal problems. The surgery had healed well and peripheral vision was markedly better. So the unknown blurriness has continued with varying degrees. Further searching for a solution will be required. New glasses are also on the to-do list.

I’ve never done any applique. Buttons will go in the center of some flowers after quilting. Another for a group member

My TV that had been having freak outs, finally lost it while scarring me half to pieces. I was ready to opt for no TV. The silly thing was not even 6 years old and had been in and out of storage depending on if I had a place of my own to live or not. Yes, it’s been that kind of decade. So my son decided to buy the new TV since his had not survived his move. He had help packing. 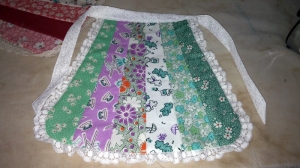 The second mini apron for a fellow quilter

Last but not least, my refrigerator started leaking water behind it again. Manufactured homes don’t do well with water leaks. We had already tried a new motor but the fridge was 14 years old, not ten like I had “assumed”. So off to the discount appliance store we went. For half of what I paid for a fridge in 1998, I got a perfectly wonderful new one that will not leak, ruining flooring and walls in the process. I scored a good deal and it will add to resale value here should the need arise. I am old after all. Energy Trust got the old one to recycle properly.

These were the most fun for my quilt group member and neighbor.

The eyes, engine, TV, and fridge are finally managed and I’ve still managed to get a few projects finished. I can now enjoy the autumn weather that is peaking around the corner. Is your summer over and ending on a high note or just beginning? Are you ready for the change of seasons?

We each got 2 to make for a quilter in our group. A dozen of these will be so cute

In Search of a Verdict

In Search of Five