This month has turned out to be all I had hoped for after my January letdown. My bookcase is plastered with the valentines I received from friends and family. I didn’t get any sent out. Other things called for my attention.

As I’ve mentioned, I have been trying to clear clutter and make my space more user friendly. It’s been ongoing since I moved into my house. I have a lot of stuff for creative endeavors.

On Valentines Day I received a special gift. My blogging friend, Alys from Gardening Nirvana came to visit. It was our first meeting and I was looking forward to it as she is dear to my heart. Alys is an advocate for kindness, animals, and an uncluttered life. She has another blog that she rarely posts on entitled Organized at Heart. It’s how she makes her living.

Coming off the airplane I’d recognize her anywhere 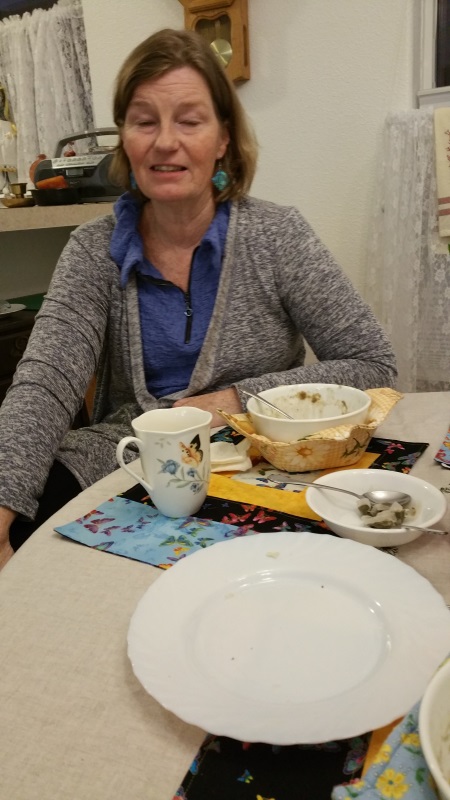 I spent many days cleaning and clearing before she arrived as you would guess. There is more company coming next week. I couldn’t think of where to take her to show her around the Portland, Oregon area. So we just let it happen. We had a simple dinner of homemade lentil soup and veggies,  The next morning we went to Bob’s Red Mill for breakfast. She buys their products but had no idea of what we would find there. Who knew it would be a huge birthday party for Bob’s 89th birthday with a band for entertainment. We even got a slice of birthday cake and a free cup of oatmeal to take home. 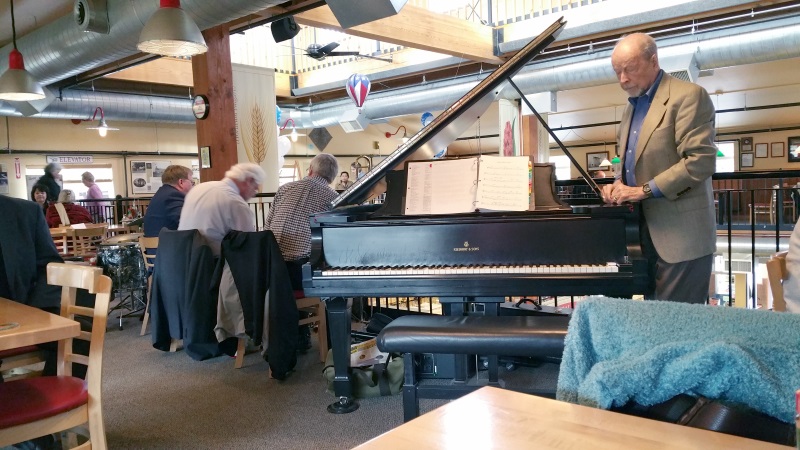 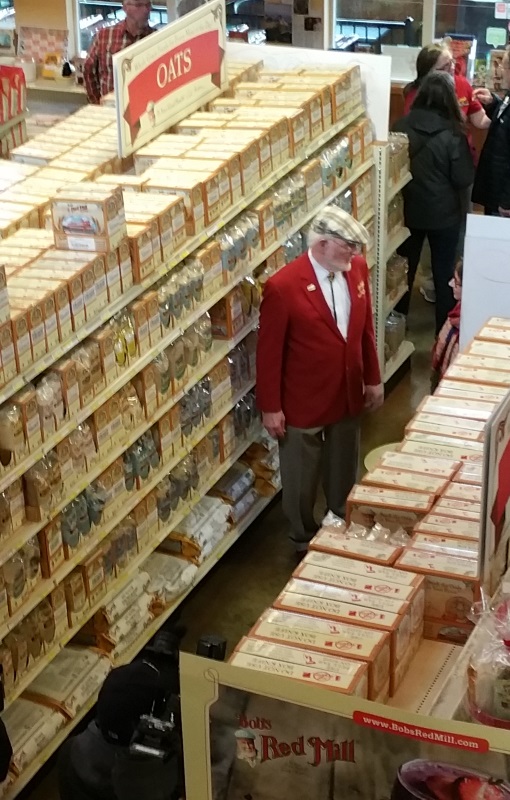 Bob at 89 stops in every weekend when he’s not working. The oldest working CEO in the country I think. 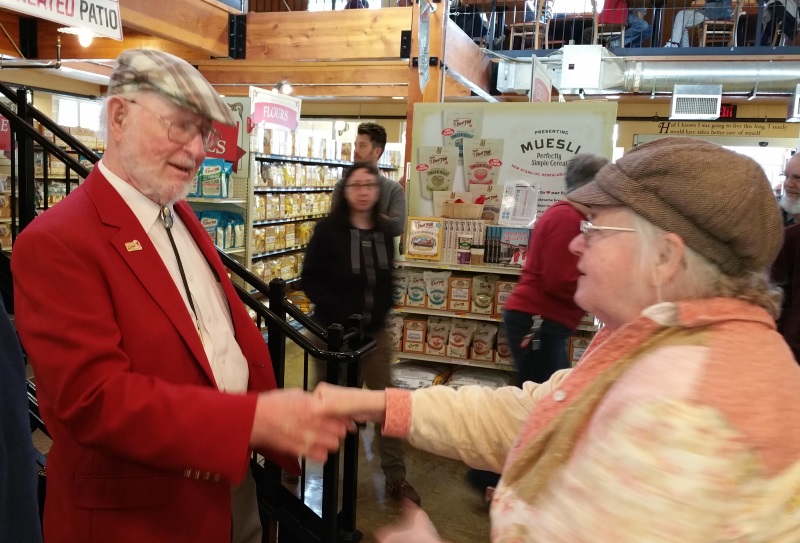 After breakfast we needed to walk a bit so I took Alys to Fabric Depot. It’s an acre of fabric and notions where you can find anything you can possibly imagine. She did find something that had to come home with her. I left it all there. I shop at home now. The party continued through the afternoon. Back at my house, I had to sit and rest my poor sore foot and Alys started to move like someone had set fire to her. She was everywhere at once. Asking how I felt as we proceeded. She immediately honed into the areas that were causing me the most grief and visualized an immediate solution. I was awestruck! 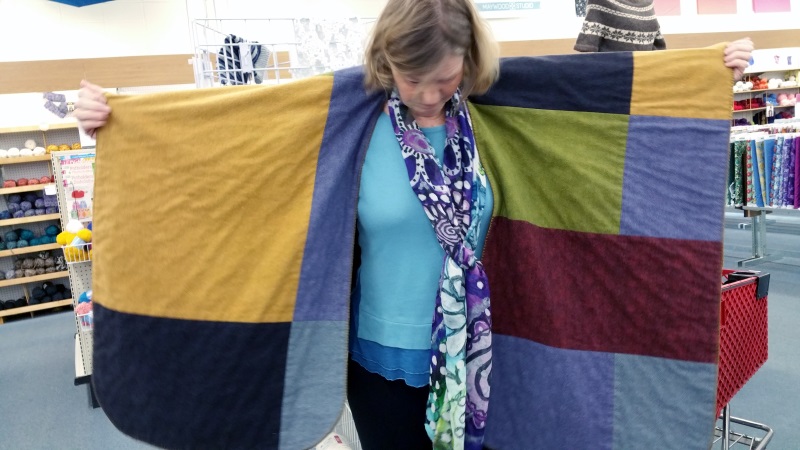 We can make this easily 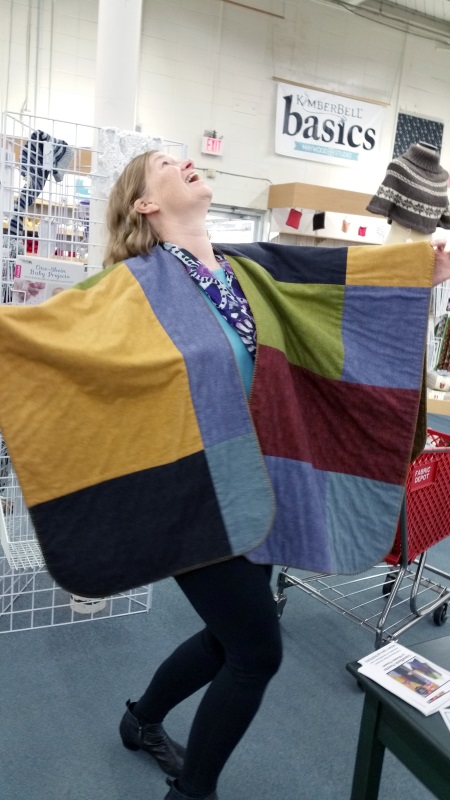 Shelves were emptied and moved and other shelves were emptied and moved and then everything went back together looking like a department store had set up a beautiful display but she didn’t do what I was so afraid an organizer would do. She didn’t suggest I throw things away. I looked at things with different eyes and a lot more left to the thrift store. We found things my daughter wanted to keep with her. 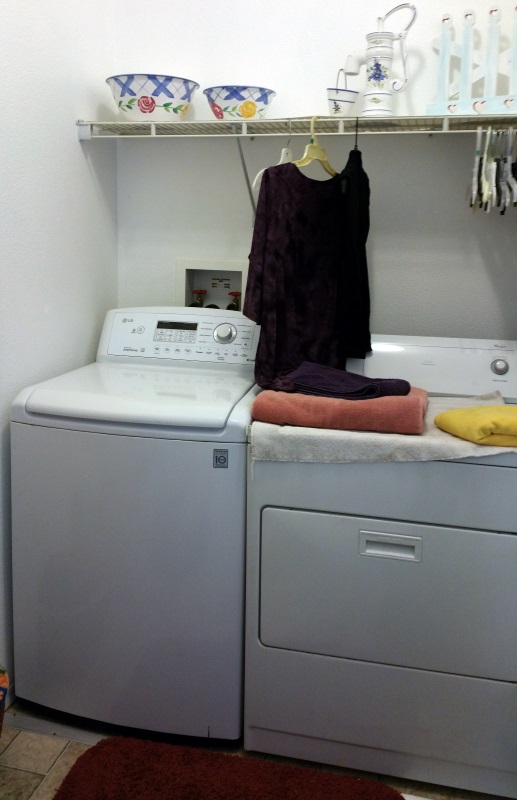 Above the washer has never been so pretty. One day maybe a closing cabinet.

The next day, we had a light breakfast to fortify us for a trek through Powell’s City of Books, occupying an entire city block and housing approximately one million books. We only spent and hour and a half but managed to find things we couldn’t live without. 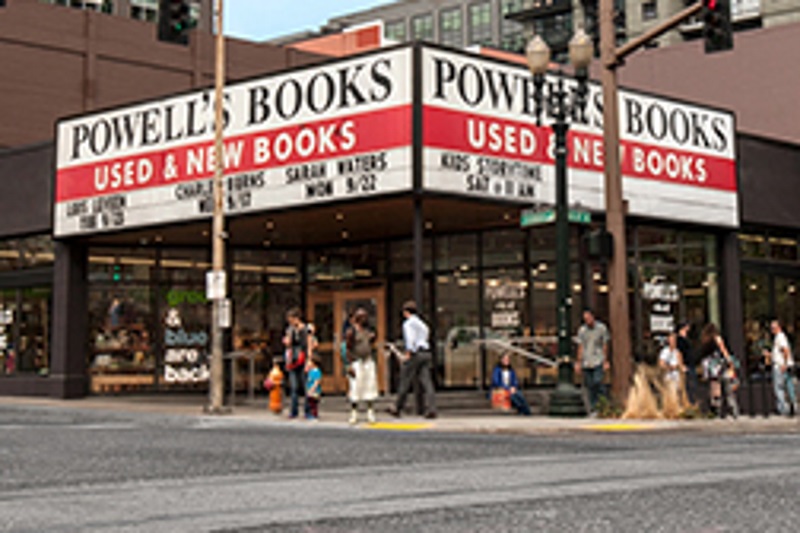 My sister had to drive us there as it’s out of my safe range. Then we went to have lunch at a nice and noisy restaurant friends of my sister own. We waddled out but stopped at Salt and Straw for our evening dessert to go. My sister drove us by the Rose and Japanese gardens but it was too cold and wet to stop. 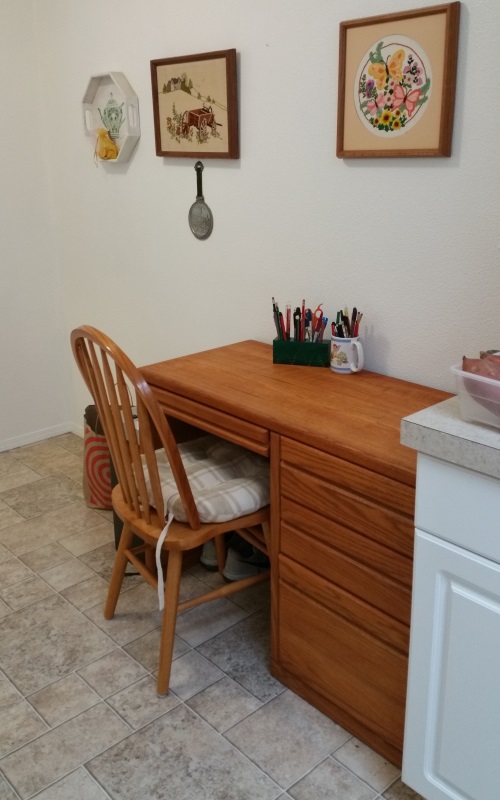 Much lighter without the bookcase on top. 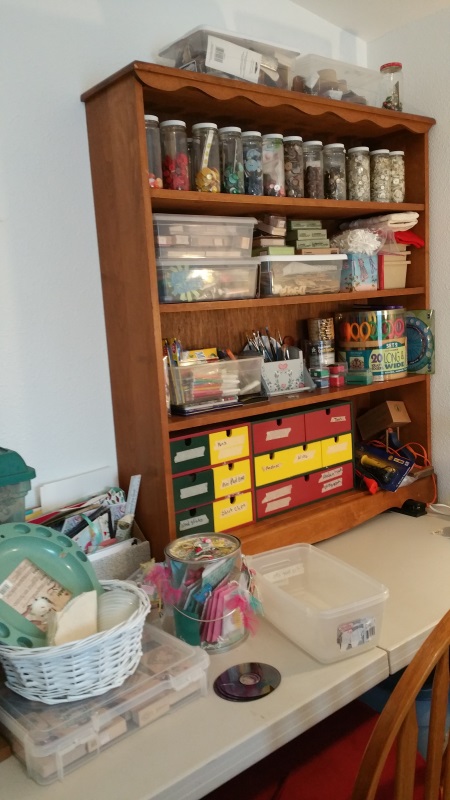 This bookshelf was on the kitchen desk. 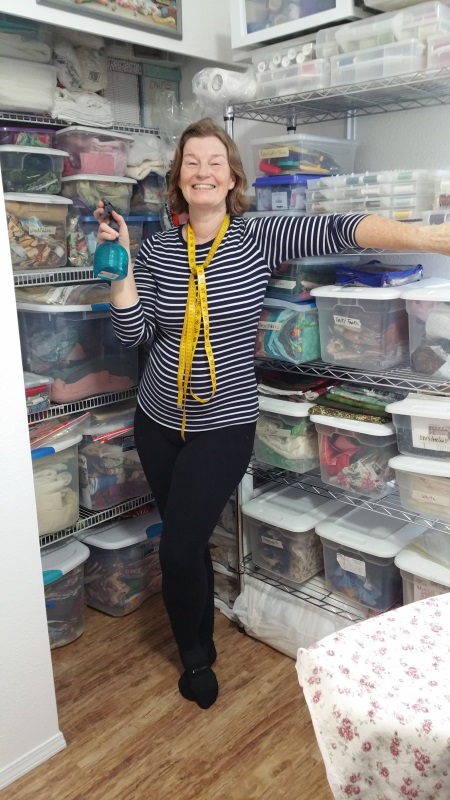 That rack was originally in the laundry room looking quite ugly. Much better here.

Getting back home, Alys once more became more energized and the next thing I knew three more rooms had their Chi fluffed big time. I hobbled along the best I could but Alys was moving like lightning making changes to make my life so much easier. It’s like she read my mind and saw how I needed things to flow. I’m now able to do my sewing and crafts in a way that brings peace to my soul. 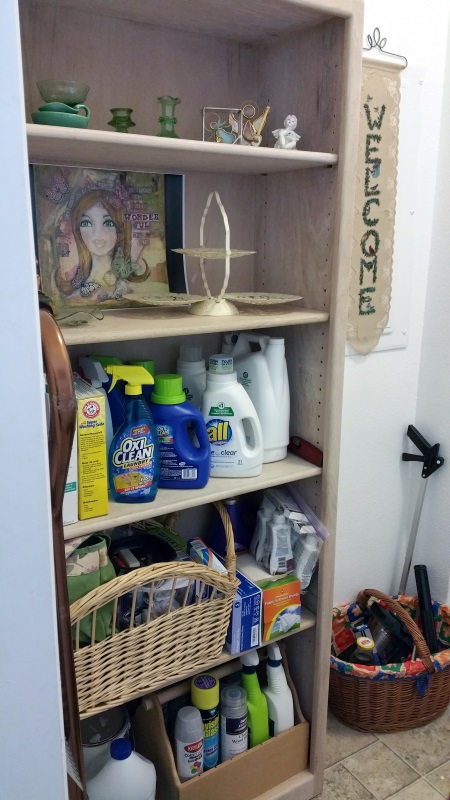 This was next to the desk in the kitchen. An emergency basket on the floor by the back door. I’ll paint this bookcase and the others this summer. 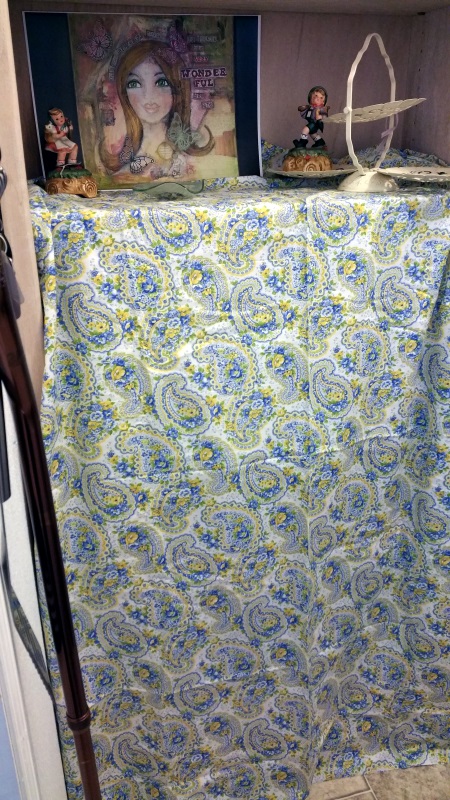 Will be putting a tension rod to cover the detergents.

My daughter came the next morning and was overwhelmed by how well Alys had read my needs and provided them. My daughter has dubbed Alys her new Goddess Hero for making my life so much lighter. She was gleeful as we moved more things around. In Feng Shui, there is a phrase that if you want to change your life, move 27 things. I think big changes are coming now.

Would you be able to let an organizer help you?

Comments on: "An Organizing Goddess" (91)