The Rest of the Story

There has been so much going on that I almost can’t remember it all. The last two weeks of August and the first weeks of September were so packed that I slept a lot of last weeks trying to get my bearings.

My son (TS, tech support) came from Arizona to bring my daughter his car. They had three older cars in the driveway and his was not used except for long trips. It seemed logical to have my daughter pay her brother a reasonable amount each month instead of a bank. They both win. He will eventually get something more suited to his snow-covered mountain area. She will have AC in the summer and back warmers in winter, something she has been without for almost 10 years now. 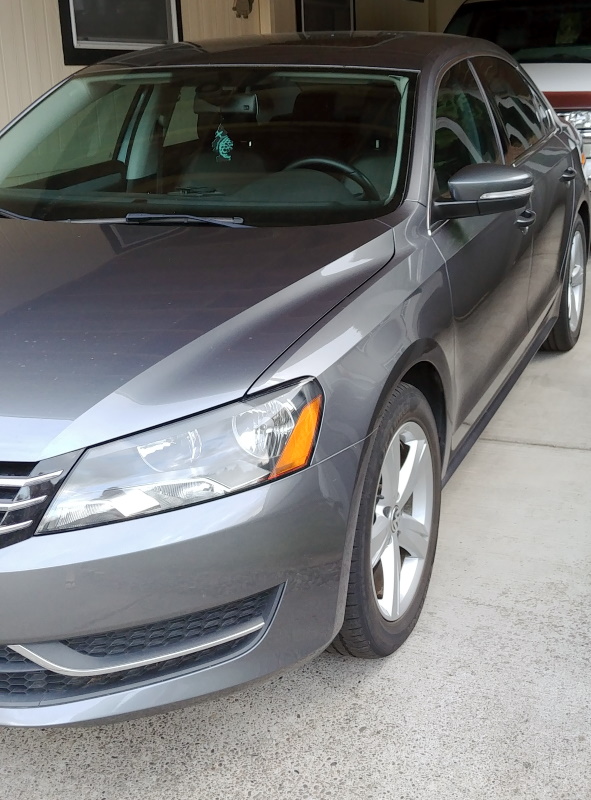 My son took me for birthday lunch at my favorite German restaurant where we ate lightly, so we had room for my favorite birthday dessert. Yes, I had it twice this year. Then we proceeded to work it off in the back yard. He bought me a yard of ¾” rock for my birthday and unloaded it from my sister’s pickup. I helped by directing. We moved the landscape logs and added more so he could complete his vision for my back yard. He loves to move things around. Last time it was all the furniture. 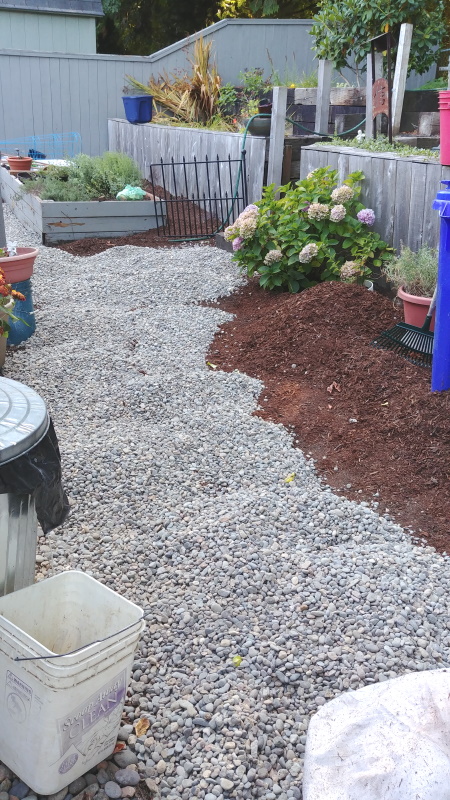 TS shoveled it all.

He worked on my daughter’s old car finding that what the mechanics had said was wrong with it, was not. When I took mine in for an oil change, they told me the water pump was leaking and plugs and wires needed to be replaced. I had a new engine put in four years ago and all of that was done then. He called them on it and they verified it. We are looking for a new mechanic but I think it will always be the same story. My daughter needed the hinge on her old car door fixed. He broke the windshield but he fixed the door. I love that kid. Then he anchored an upright post the roofers failed to do. Does anyone need a lazy kid? Let me know if you find one. He’s not it. 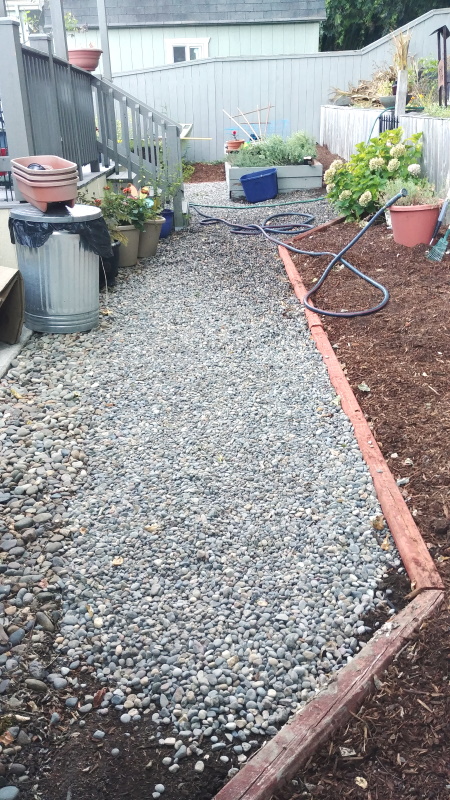 Since my birthday fell on Labor Day weekend, my daughter and I had three days to celebrate. On Saturday we drove 30 minutes to the Swan Island Dahlia Farm for their yearly open house. This was my first visit since moving here. I had to share a few of the hundreds of varieties they grow. Can you find the bunnies in the mix?

Sunday was breakfast at Bread and Ink downtown and then on to the Chinese Gardens for a little walk around and tea. Then to our favorite metaphysical bookstore, New Renaissance. They had a porch sale! 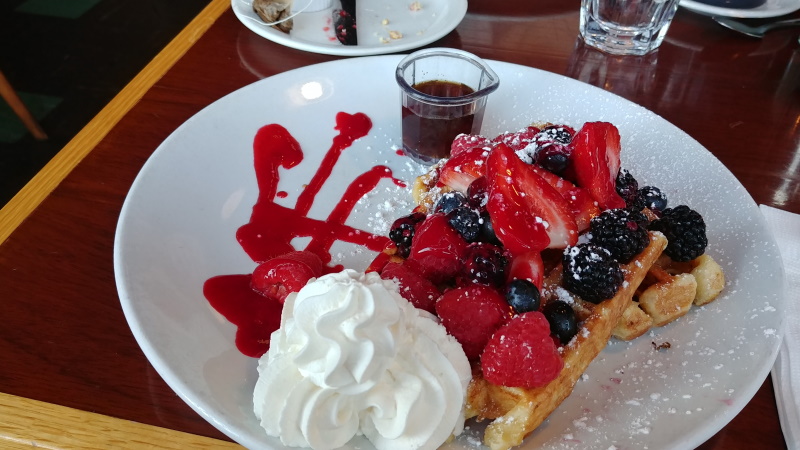 A late lunch/dinner was at the Ram where I got my free birthday ice cream mudslide pie slice. Most of my dinner came home with me for later. Ice cream pie won’t keep.

Ice cream and hot fudge has to be shared.

Monday my sister joined us and bought lunch and dessert at Papa Haydn’s. If you ever get to Portland and have a sweet tooth, they have two locations and both have criminal desserts. 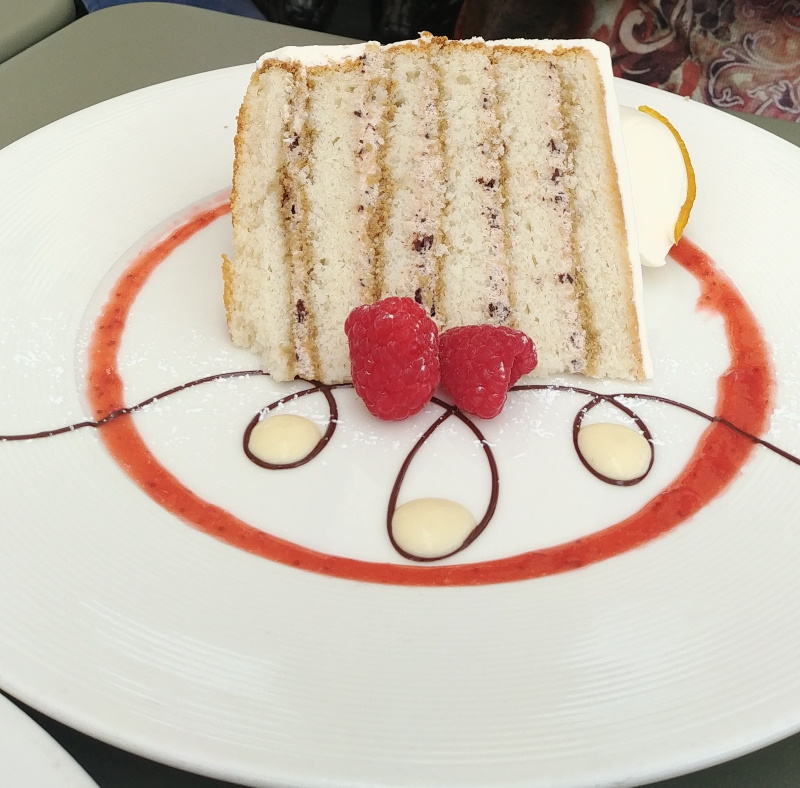 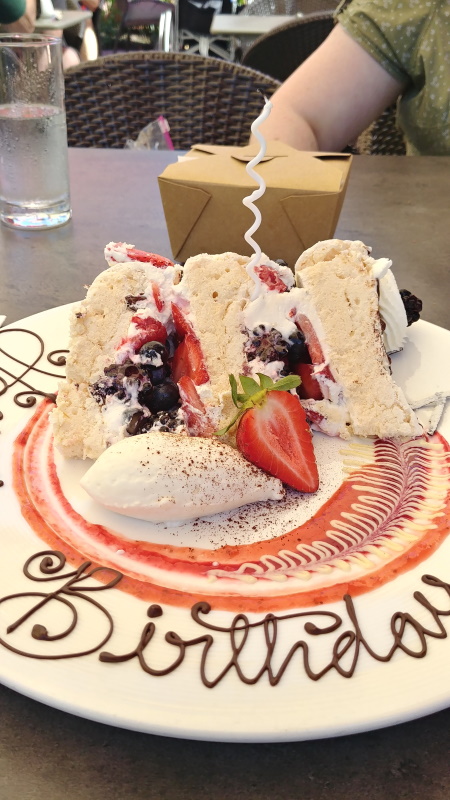 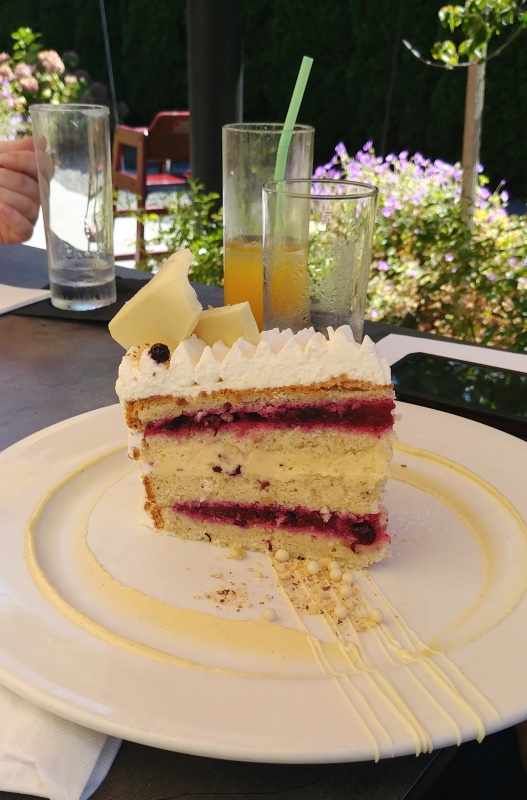 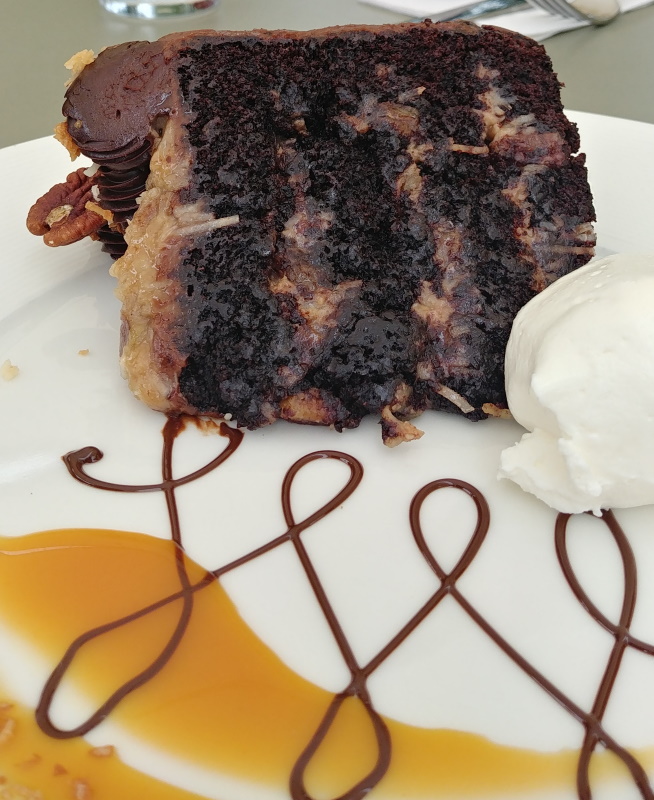 My sister also bought me a half yard of rock to fill in what the first yard did not. My daughter pulled a lot  out  with a hoe. Then the three of us pulled the canvas cloth off the plastic one onto the driveway. The guys at the landscape yard thought this was genius as it worked when they loaded the wrong size in the truck and I took it back for the right size. I was not going to settle for something that wouldn’t work for me.  It only took me one morning to get it all moved to the back yard. I ask for odd things for my birthdays. I’m a very practical Virgo. 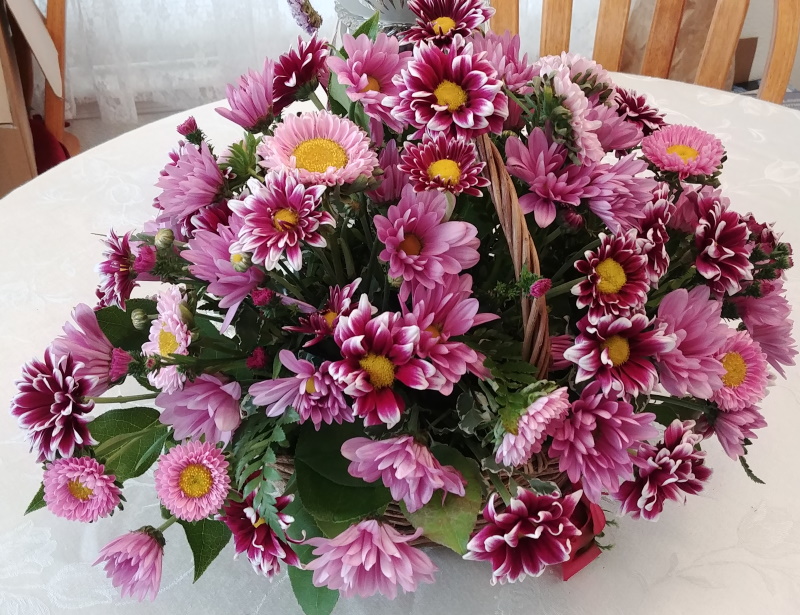 Flowers from a very kind friend

Tuesday, I went on a diet that will last till my daughter’s birthday in April. I’ll pass on the holiday goodies this year. Birthdays are more important to me. I want another one..

I had another adventure this last week I’ll tell you about next time. Do you prioritize birthdays over holidays?

My favorite month is half over in the blink of an eye. Two weeks gone but they were fully loaded. You remember the lonely Aster flower on September first?

This Aster has its own calendar

Well two weeks brought quite a change in the plant and in the weather. We are going from the upper 90-degree temps to mid-70’s and starting next week, we will get to the 60’s with a full week of rain. This is what I call race weather. I race to get everything outside done and buttoned up for whatever comes next. There is no second guessing the weather these days. You must be ready for anything. 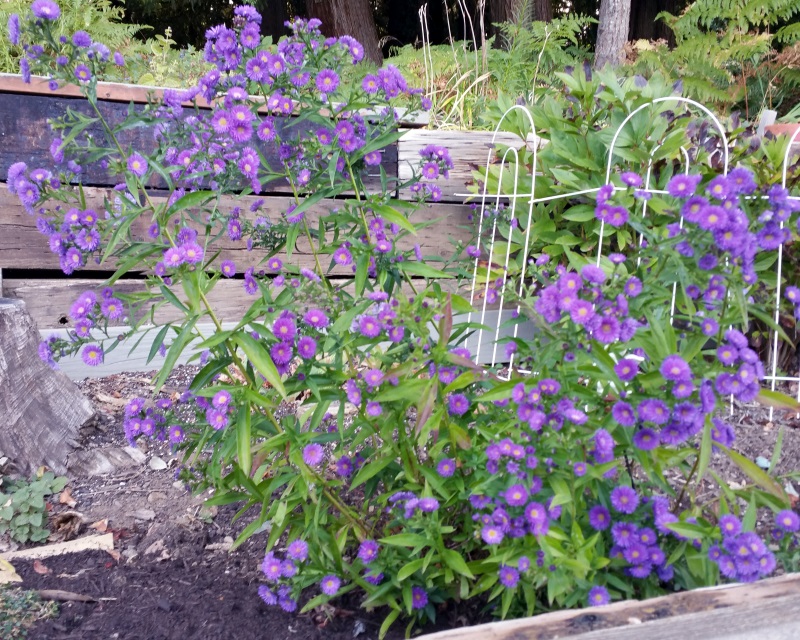 September is a busy month around here. It starts out with lots of birthdays. I get mine early and then many friends and family fall in line until the month is just one big celebration. My daughter and I had a simple Saturday together on my birthday. I felt a little giddy as I waved farewell to the last of my 60’s.

A special blogging friend knows me so well. I really wanted that book too.

First, we visited our favorite metaphysical bookstore downtown to see what was new. I spotted the pretty journals that I did not need but this one made it into my daughter’s shopping bag. I’m going to write my goals and dreams for the next year in it to start the 70’s out right. It was presented to me over a luscious lunch at a tiny Italian place within walking distance of the bookstore. They are known for their criminally delicious desserts of which we had to partake. There was a candle in the cake and Happy Birthday written on the plate.

I forgot to photograph it before digging in.

I never remember to take off the hat.

My son gifted me with the laptop, refurbished with a hard drive that should not break if it was jostled. Now I can visit with everyone again.

Some of the cards that graced my day.

On the way to lunch, wait for it, we saw there was no line at the Salt and Straw!!! It was only 11 a.m. but I had never been able to get in to try their ice cream. It’s famous in Portland, Oregon for its locally sourced and organic ingredients. Lines usually going around the block all day. Dessert before lunch? Well it was my birthday and they were all but waiting for me. I had to try it once. 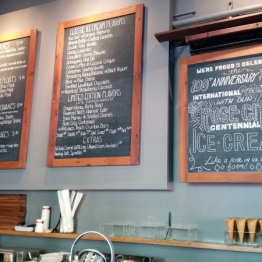 Quite the menu. I couldn’t read it so my daughter helped.

We did a lot of walking that day to work off the lovely lunch getting home as the 90 plus degree temps invaded our day and we settled in to sit and read. 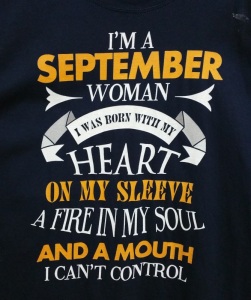 The first and last part are most applicable to me.

September is my favorite month as the autumn descends upon us and cool things down. Remind me of this post when you see me lamenting the cold and gloomy months ahead. I love the cold over heat but will miss the fresh tomatoes from my garden that I munch on as I work outside. 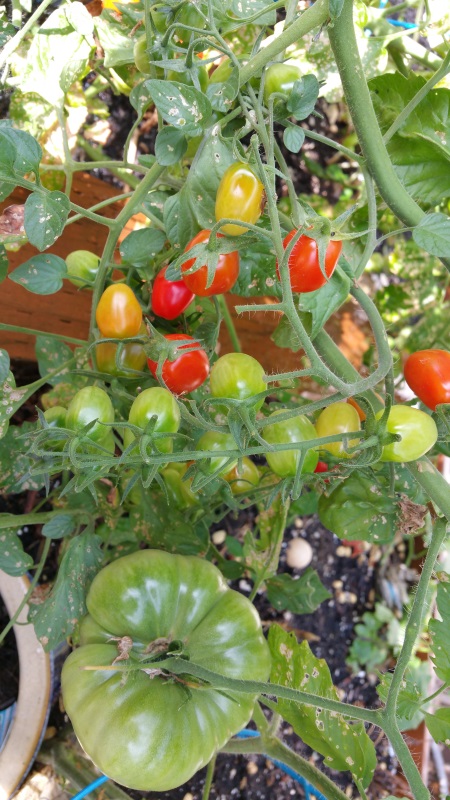 The big ones had a hard time, The little tomatoes were prolific

I will miss the hard physical work of hauling mulch up the terrace steps and the weeds that always seem to grow better than the flowers. Mostly, I will miss the long daylight hours as days shorten into longer nights. This is the month of transition from summer to winter as autumn here, only gives us a brief wave and moves on.

Are you ready for the changing seasons? What is your favorite month?

This is an Award Free Blog. Your comments are welcomed.
Join 864 other followers