SUZY Q Dancing on the Dresser

It seems a natural thing for children to dance, a spontaneous action to their inherent joy. It becomes an issue when children dance on high things and don’t always pay attention.

It took all her strength to sit still there

My younger sister liked to dance, anywhere, anytime without a care in her mind. She was as happy and playful as I was serious and responsible. Her joy and playfulness fed my soul. She had rhythm where I had none. Her balance came later. I have to admit to finding no photos of her dancing anywhere because our parents were too busy to take photos.

By the time the youngest was that age, dancing on the furniture was photo worthy.

I heard the cry and ran into our bedroom. Mom ran in too. Mom saw the blood and started to panic. The drawers were pulled out of the dresser to make stairs so my sister could climb them to the top. As she had been dancing on the top of the dresser, it dumped her over and her head hit the corner of a drawer.

There was blood everywhere and mom didn’t know what to do. This was a new one for us so it seemed like the thing to do was to ask someone who might know about these things for some help.

I ran upstairs to the apartment directly above us. Mrs. Markum had three boys. Rowdy, mean boys that were always tormenting me if they saw me outside and they were also always covered with scrapes and cuts from their antics. A younger one was my sister’s partner in crime. Mrs. Markum would know what to do with blood.

We were on the bottom left of this building. Mrs M was directly above Photos taken in 2006 when we returned for a visit.

These were big buildings with several rows of them behind us.

I knocked and she answered. I pleaded my case and she immediately ran downstairs to help. Putting pressure with a clean cloth on my sister’s head, the bleeding slowed and then she scooped up my sister and took her and my mother to the base medic. When they got back my sister has a couple of little stitches at her hairline and a Band-Aid. She was happy once again and mom had some color back in her face. I had stayed home to watch my brother while they were gone and mop up some of the blood from the floor. Who knew heads bled so profusely from small cuts.

Mrs. Markum said that when the head bleeds like that, just put a clean cloth with some pressure on the cut. I was happy she talked to me like a grownup and realized that I would understand and know what to do. Thank goodness because this was only the first of seven times in that year my sister would need to be treated for what I called “holes in her head” during that year. She was like a bull in a china shop, running, dancing and plowing into things that made her head bleed.

How could you ever be angry with a face like that? Age 3 inside our apartment.

Our dad would often comment when we said something he thought was not too bright that we had rocks in our heads. When my sister said or did things he would think not to bright, she had holes in her head. It never stopped her from dancing though.

Dad called her Suzy Q all the time though that was not her actual name. Sue was her middle name. I asked him once what the Q was for. He said it was for questionable. I think the question was mostly what she would get into or up to next. Right from the very beginning with her first toddler steps, it was apparent my sister was a pistol and born without the fear gene. Tiny toy pistols were exactly what Santa got her for her first Christmas.

We celebrated it in Colorado Springs. Dad was reassigned to Fort Carson after he got back from his tour of duty in Korea. He found a little house for us to rent and part of the rent was refinishing the floors. After sanding the floors and putting fresh finish and wax on them, mom would set the two of us on an old GI wool blanket and drag us across the floor to polish it. The polishing was done once a month and it was our favorite activity. Mom developed a very strong back and arm muscles dragging us around.

Mom had to keep my sister in jeans and a t-shirt all the way back in the 50’s. Sis was not still enough to keep dresses intact. Rough and tumble, into everything, mom ran herself ragged trying to keep her out of danger and mischief.

Keeping an eye on sis

If sis was no longer interested in eating the soup we had for lunch and mom refused to remove the bowl, sis would turn the bowl upside down on her head letting the soup drip over her face and clothes. Quite pleased with herself, she cared not one whit about the spanking that followed. Food was not something that we were allowed to waste, no matter how bad it tasted. Mom was not much of a cook and groceries were not plentiful. There were plenty of spankings but she would just strap on her toy gun belt with twin pistols and charge on.

bowl on her head

On that same Christmas, I received a doll. Only one gift each, it was quite precious to me. I came home from first grade after the holiday and could not find my doll. My one-year old baby sister had somehow managed to get the doll past our mother and take it outside, tossing it in an open sewer pipe. Fortunately, she had only tried to bury it, not dismember it. She told us in what words she had that she didn’t like the doll. It had to go.

We were only there six months, then it was off to Fort Riley, Kansas for another six months before his next tour of three years in Germany. Oh, what fun my sister was going to have there.

In Search of a Different Kind of Life

My sister came by this week for a short visit and was asking some very pointed questions. She was having a great deal of guilt because she thought she had cheated me out of a childhood. Even our mother admitted to friends that I raised the kids. My sister was sad that I could remember few joyful memories of my childhood. They were there; they just don’t stick like the hard times do. My joy came later when I had my children though it was balanced by the difficulty of my other relationships. I think that’s what life is, yin and yang, light and dark.

I assured my sister that my life has had many good moments and it continues to get better and better. I had the impression when I was very young that I came into the world to take care of people. It’s what my astrology and numerology chart say also. I’m the caregiver, nurturer, teacher, etc. I tell friends that I was born 108 years old. If our parents had been more capable, I probably would have found someone or something else to take care of, but as luck would have it, our parents had very little to work with or perhaps the plan all along was for me to be in charge of all of them. Yes, I raised mom too.

I read stories every day, of people with less than idyllic childhoods but most of the stories end up with these people growing into the most wonderfully capable, kind, caring people. Ours was not stable or nurtured but it certainly was interesting. Each of us turned out to be kind, caring, productive members of society.

When friends ask my sister why her life has been like a carnival ride, she tells them it was because a five year old raised her. We both know that’s only part of the truth. She came into the world with an agenda of her own. Part of that agenda was to challenge the world’s archaic thinking and she is doing a fine job of it. It’s a tougher job than any I’ve ever had. Her enthusiasm in life balances my stoic quietness. Thank goodness. Yin and yang once again.

Ready for the challenge 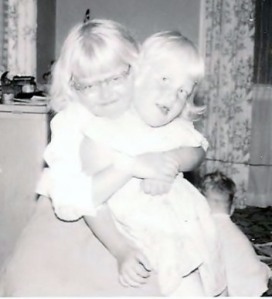 She was all mine to love and discipline. Me at 9, she was 4

I told my sister that we didn’t get the cottage home with a white picket fence and Mr. & Mrs. Cleaver weren’t our parents but we got something else. We had an adventurous life and an extraordinary bond. We were never afraid to say “I can do that”. There is still so much to learn and experience. We are still alive and the adventure is ongoing. There are questions to be asked and answered. Would I have traded any part of my life for a more carefree existence? I don’t think so. Our lives are different than most and continues to evolve in that direction. I am in a unique position to create the life I want to some degree. Other than this stupid illness (Bells Palsy), nothing is holding me back. Life is supposed to be fun but mostly, I want it to be interesting. Different, odd, unique, adventurous, even downright hard is better to me than ordinary. I volunteered for it and I wanted to make sure she had no guilt left when she left here.

Would you prefer simple and ordinary over hard and different?

Bells Palsy, journey to health, My thoughts about things