It’s hard to explain but the best I can say about Alys’ visit is that a switch was flipped and I saw a light at the end of a very dark tunnel. Clearing so much out of my line of sight seemed to lift a weight off of my shoulders. After a short rest, I walked into my organized sewing room and got to work.

All my projects were listed in order of priority. I started with making the kitchen curtains from fabric given to me by my sewing friends. They were coming to my house for sewing that week. It had been laying across the curtain rod since I decided that’s what I wanted to do with the fabric.

close up view of fabric

Then came a machine embroidery, quilted for a friend who I felt could use a little lift. I had planned to mail it as soon as I finished it but as I finished the binding at my sewing group, my friend Patti said she needed it for the Senior Center’s quilt show because they didn’t have enough to show. It was a fund raiser for the Senior Center and Meals on Wheels. How could I say no?

How it all begins

Hanging at the quilt show 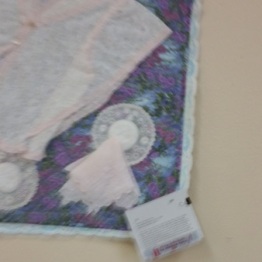 Almost couldn’t find it . They put it next to coffee shop door

I’ve never had one of these

Next came the shirt Patti asked me to make for her almost 10 months ago. She gave me the fabric and I had to decide how to piece this puzzle together. It’s the first one I’ve made in at least 10 years. Patti seemed happy with it. It’s called a Big Shirt to be worn over another like a light jacket and this one is made of flannel. 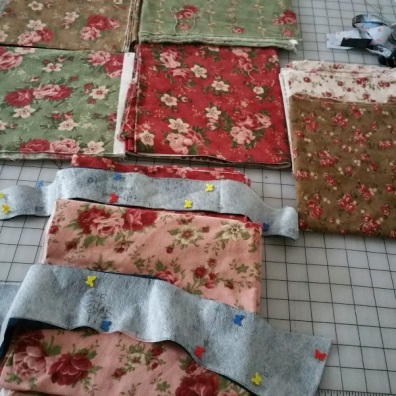 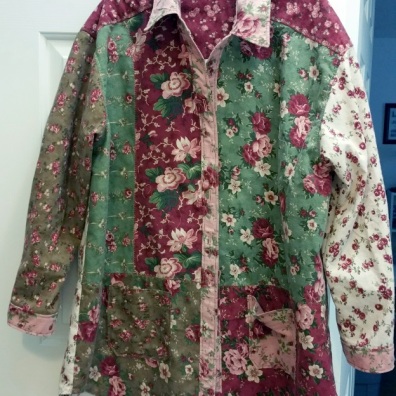 FINISHED on the hanger 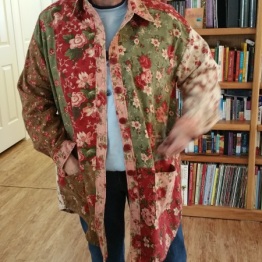 It’s a Big Shirt and Patti is very little

The back of Patti’s shirt

I made a cover for the pillow I need in my car. The old one had long gone to the trash and I had a new form in my closet and even had the cover cut out. That’s as far as it got until the shirt was finished.The serger was out and ready for the shirt so pillow cover was next in line. I’m a little taller in the seat again now. 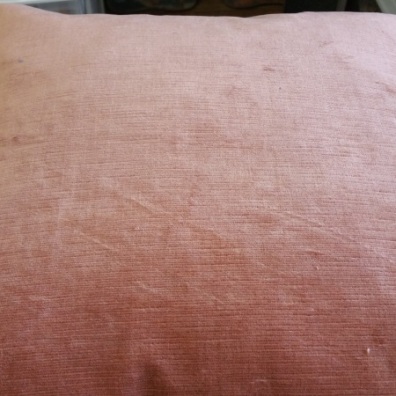 On to something really easy. Car seat pillow for the vertically challenged

Easy in and out. Used upholstery fabric I’ve had for years

Since they were all sorted and sitting in a reusable zip lock I started on bowl cozies that had been waiting not nearly so long. Batting was already cut so I just cut fabric and marked it for stitching. They go quickly but not quickly enough for me to make for sale. I sew to make gifts. It’s not an easy way to make a living especially if you don’t see well and sew like I walk, wobbly.

There were fun to do but take a bit of time.

So now there is only one project that I’ve procrastinated on for well over a year, as the pattern is one I’ve never used and directions are sketchy. I’ll tackle that next week when the rain starts again. I expect a few uninterrupted days together to get started now that my courage is up there.

I’ve spent time working in my yard pulling weeds which always makes me feel calmer. That’s the plan as long as the rain holds off. bumble bees are working hard out there already so I have to time my work carefully. I’ll keep you posted but it’s already looking much better. 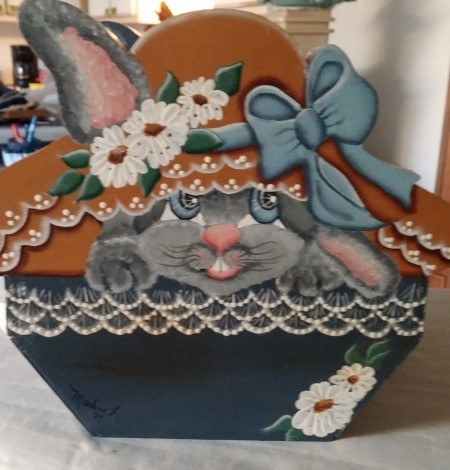 My Bunny Basket for spring. Painted back in the late 1980’s

Does organization make you more productive?

Happy Easter to everyone or happy spring.

Frau Zanker was a long time friend of my mother’s. We had apparently (I was too young to remember) lived close by when I was quite young. She had raised her two boys quite well. One of the Zanker boys was several years older than I and the other closer in age. We spent a great deal of time together in those early years prior to our leaving Germany for the three years my dad was stationed in other places. The friendship resumed on our return and they came to visit often.

With her two boys in tow, Frau Zanker had convinced my mother to let her take my sister home with her for several weeks. She knew I was needed as mother’s helper with two more babies in our home. Frau Zanker thought she would be borrowing a younger version of me. My mother relented, not having the energy to continue explaining to Frau Zanker that my sister was a larger handful than she could imagine. What could go wrong, right?

Augsburg was only 25 miles or so from our home and my mother had not learned to drive yet. Frau Zanker was going to bring her home and we were going to get some much-needed rest. Mom sent her off with six pairs of jeans and shirts. Of course, there were a few of the mandatory dresses all little girls wore.

Shortly after the incident with the neighbor lady accusing my sister of painting the bicycles in the basement, my mother got a call from Frau Zanker asking if mom could come and get her right away and please bring more clothes for her.

Mom had dad drive us down to Augsburg to get my sister. Their house was surrounded by a huge wrought iron fence and gate with pointed arrows at the top of each post. The fence was over six-foot-high and my sister was well under that at the age of three. She was safe inside the yard.

When we arrived, there was no sign of my sister. The distraught Frau Zanker said my sister had figured out how to get over the fence and disappear into the city leaving bits of torn clothing behind…daily.

I was sent to find her once again along with the younger Zanker, who had been hunting her down each time she escaped the yard. He had an idea of where she might go. We walked quite the distance and across a very busy street until we found the park. It took awhile and I was getting frightened by the large city traffic, noise and large amounts of people. We did finally find her and brought  her back in another pair of torn jeans covered in mud she found somewhere in her adventure.

Mom thought Frau Zanker was kidding when she said my sister needed new clothes. Every pair of jeans and all her shirts had been ripped as she climbed the fence or the trees in the park. My sister was on holiday and enjoying herself very much. She was having fun but not pouring paint on bicycles.

The one thing I can say about all those years with a sister like mine,  it was good preparation for when I had a daughter very much like her. Fearless little Houdini’s that could disappear in the blink of an eye over the tallest of structures. I wish I had one iota of that fearlessness.

Join 883 other subscribers
This is an Award Free Blog. Your comments are welcomed.